The first ‘Hybrid 7.5’ trailerable power cat has been launched with great success in Hobart, to the delight of owner-builder Paul Matters. Underwater the Hybrid 7.5 utilises the CHATM hull technology (Patent Pending), while maintaining a more conventional arrangement above the water in order to preserve functionality as a large trailerable vessel. The CHATM technology has allowed the spacious 7.5m cat to achieve 28 knots with only twin 70HP outboards, which is staggering for such a large boat. Furthermore this technology has provided the Hybrid 7.5 with what Paul Matters considers (quote) “an unsurpassed ride”. 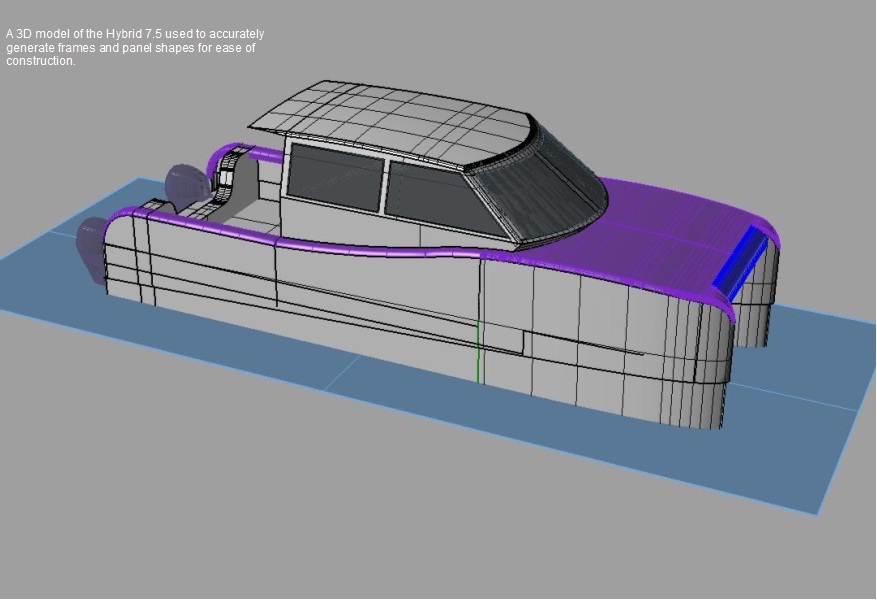 In all his years on the water, having owned numerous boats (including both cats and monohulls), Paul has never experienced such a comfortable vessel in rough water. This is a big call considering Paul’s experience on the rough waters of southern Tasmania and his search for the ultimate vessel for these challenging conditions. In fact prior to launching Paul had installed a gas suspension helm seat in the vessel, as had been required in his previous boats, but now considers it completely unnecessary; “Installing the suspension seat was a waste of time, even at 25 knots into a 25 knot wind and a sharp and confused 3/4m chop the chair did not have to work once”. Having tested and pushed the boat considerably since launching, Paul says he is yet to find conditions where he was forced to reduce speed for either comfort or safety.

This is the major advantage of the CHATM hullform and the Hybrid 7.5 over all conventional vessels, the ability to maintain high operating speeds in virtually all conditions. Many modern power boats utilise huge amounts of horse power to achieve 35+ knots but can only do so in flat calm water and once they reduce speed they are forced into a very inefficient operating range (often falling off the plane) which only exacerbates their poor efficiency. The Hybrid hullform has a very linear speed/power curve, meaning that the vessel operates efficiently at all speeds. This is due to the nature of the CHATM hullform, which is highly efficient in the displacement mode and gradually increases lift into the higher speed range without any pronounced humps or hollows.

For more information regarding the Hybrid 7.5 view the brochure below, or contact us for a study print. Photos of the Hybrid in action will be posted soon. 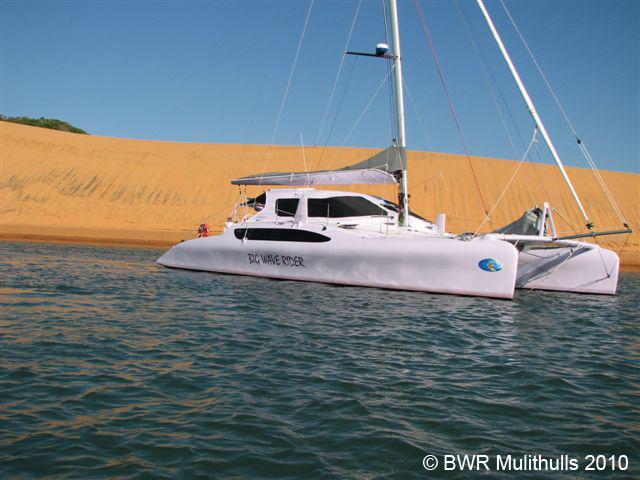 Bruce Arms of the Sunshine Coast has taken out both line honors and the multihull division of the 2010 Solo Trans Tasman yacht race in his 14m performance cruising Chamberlin catamaran. For much of the race Bruce looked set to take out the Trans Tasman record, averaging almost 10 knots and reaching speeds of up to 22.8 knots before being left stranded by light airs in the final stages. Bruce still managed to finish in 7 days, 6 hours and 34 minutes, more than 2 days ahead of his nearest competitor.

It is the third time Bruce has entered the Solo Trans Tasman and his second line honors victory. Sailing the 1998 race in his Mike Muir 9.5 'Skiddy Too', Bruce met fellow entrant and line honors winner Robin Chamberlin who he commissioned to design his and wife Suzanne's dream yacht. The product of this meeting (and a few years of hard work) is 'Big Wave Rider' a 14m catamaran with the speed and performance necessary for Bruce and Suzanne to compete in (and win) races across Australia and New Zealand and the comfort required of a live aboard cruising yacht. Bruce won line honors in the 2007 Solo Trans Tasman on Big Wave Rider's debut and has now become the first person to win the race twice in it's 40 year history. This result has once again highlighted the pace and excellent handling of the Chamberlin 14 which has allowed Bruce and fellow Chamberlin 14 owners to both cruise and race vast distances short handed.

Also sailing this year's race in a Chamberlin was Steven Arms in his newly launched 10.3m cat 'Nitro'. Steven came in fourth across the line and second multihull which was a remarkable effort considering the boat was launched six weeks before the start and had only sailed 1000 miles (the qualifying requirements) prior to the race. Steve suffered from teething problems for much of the race including electrical issues and the loss of his autopilot, given this and the battering the fleet endured during the race, Steve did exceptionally well and was understandably very tired upon entry to Mooloolaba. We will be following the progress of Steve and 'Nitro' in the future with great interest as she looks set to be a very quick little boat.

Congratulations to both Bruce and Steve! 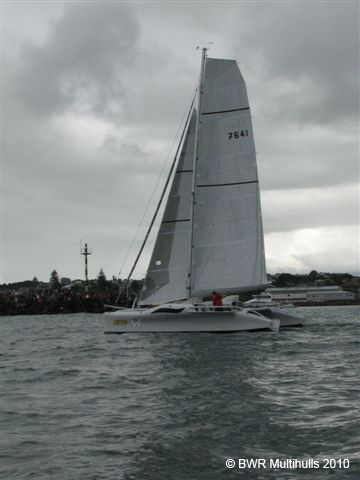 With only a few weeks left before the start of her maiden voyage, Steven Arms has launched 'Nitro', a 10.6m Chamberlin catamaran, in the Waitara River, New Zealand.Arms (or 'Sticker' to his mates) commissioned Nitro as a category one race yacht that could compete in demanding ocean races such as the Solo Trans Tasman, as well as allowing for just a little comfort for cruising, which he intends to do in the Whitsunday's after completing the race.

Nitro was built from strip planked Divinycell foam, Nuplex Epoxy resin and E-Glass fibres, with some Carbon utilised in highly loaded areas including the x-beams and chain plates. She has a 15m aluminum rig, a 50m2 mainsail and a 20m2 jib made by Fyfe Sails in Auckland who also provided the reacher and spinnaker. Nitro utilises Robin Chamberlin's state-of-the-art x-beam configuration which efficiently supports and distributes the rig loads throughout the vessel. The composite beams comprise of laminated Kiri timber with E-Glass and some Carbon employed for added strength and stiffness. Nitro also features walk through transoms which make her open and accessible and will be a great attribute for Steve while cruising the Whitsunday's.

Inside Nitro has modest but comfortable living areas with space provided by the flare in the hulls which maintains a sleek underwater profile while also preserving important reserve buoyancy above the waterline.The starboard hull contains the galley which consists of a two burner stove, modest bench space and a sink, while the port hull contains the nav station and a flushing toilet which utilises a 40L holding tank beneath the forward bunk. There are also aft bunks beneath the cockpit floor, complete with windows for natural lighting, bringing the total accommodation to four.

Finishing Nitro became a whole town effort with many of Steve's friends and family pitching in to get her to the start line of this year's Solo Trans Tasman.We even sent Robin Chamberlin over from Australia to help in the final stages and to give Steve a few tips for the race.After all, it was at the start of the 1998 Solo Tasman when Steve met Robin who was sailing Excess and decided he liked it so much he wanted one!

Good luck Steve, we trust you and Nitro will see many satisfying ocean passages together!